Home>Blog>Diving>Where does the name “Red Sea” come from?

The Red Sea, with its two gulfs located at the north, has been strategically important throughout history for its geographical logistical and economical influence:

starting from the time of the pharaohs, through the Exodus, to the Islamic trade line and pilgrimage and, more recently, as the main link between the Indian Ocean and the Mediterranean Sea and as the:

Its importance along with the history for people of all eras has given it many different names:

1. The name Yam Suph (‘The Sea of Reeds’) is first found in the bible in relation to the Exodus when the Red Sea divided to let the Israelites cross and escape the Egyptian pharaoh army. This term has brought increased interest among scientist as reeds are generally a freshwater plant and could not survive in the salty waters of the Red Sea. One potential explanation is that the Nile River used to be much wider than in present times and would almost reach the shores of the Red Sea. Another theory points to the Red Sea containing much lower salt levels as nowadays together with the existence of underwater freshwater sources that would merge in some areas.

But getting back to the name “Red Sea” and its connection of “Yam Suph – Sea of reeds”, the main belief is that the name was linguistically adapted by the Greek from Sea of Reed to Sea of Red, and then grammatically to the Red Sea before the Arabic culture started to call it “El Bahr EL Ahmar” as a translation of the Red Sea.

2. The Red Sea is surrounded by chains of ancient mountains of volcanic origin, characterized by the red colour of their rock. Geological studies of the territory have shown that the Red Sea formed through this volcanic activity that pushed Africa and Asia apart, allowing the valley to fill with water.
The light reflection of the Red Mountains on the surface of the water would have been the origin of the name the Red Sea.

3. A more recent theory claims that the Red Sea took its name because of the existence of red coral reefs of many species. However, the fact that many other oceans around the world also have red corals discredits slightly the accuracy of this theory.

4. On a similar direction, another theory attributes the name of The Red Sea to a type of algae called Trichodesmium erythraeum. When the blooms of these algae die off they turn the blue-green colour of the ocean into a reddish-brown.

We find this explanation the most practical reason behind the name, as we are usually able to encounter this majestic colour on sunsets from our safari boats where the Red mountains and the corals are not on eyesight
———————————————
Stay tuned for more info about Sinai & the Red Sea 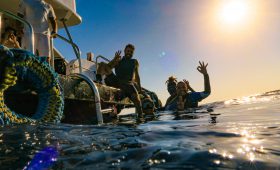 10 key habits for a proactive and responsible diver ! 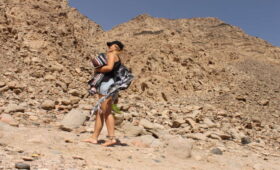 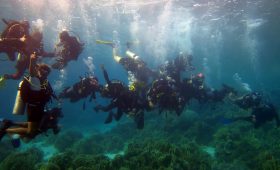